Art and Culture in Haldia

Haldia is located in the state of West Bengal. There is identification with the rich traditional and cultural heritage of Bengal. The festivals and religious ceremonies related with Bengal are the primary festivals that are celebrated in and around Haldia. Likewise, we can see the prominence of handicrafts and cottage industries related products in Haldia, which is very similar to the rest of Bengal.

One can witness the traditional Bengali culture in Haldia and even the mansions and buildings are reminiscent of the dominant architecture style prevalent in West Bengal.

A Merging of Cultures:

Haldia has a rich and traditional cultural history dating back to old times. One can see the famous Bengali culture in this part. But it is not only restricted to remembrance of the past. Setting up of new industries has brought about a cultural advancement. One can see the construction of new malls, hotels and entertainment hubs so that they can cater to the growing needs of the multicultural population in Haldia. A lot of expatriates have settled in Haldia – the major ones being the Japanese. So much so that there is a mini Japanese township called Sutaku.

Art in and around Haldia:

Haldia and the surrounding subdivisions are well known and famous for their cottage industry. The cottage industries have given a boost to the handicrafts and other crafts in the region. Mat weaving, brass & metal works and horn craft are famous handicraft items in the Medinipur region.

Festivals are an integral  part of any town, state or region in India. Haldia is no different, and people of Haldia get busy celebrating different festivals starting from the monsoon season.

The very famous Rath Yatra is celebrated in June-July. One of the most popular festivals in Hindu religion this yatra is organized in reverence to Lord Jagannath. Mahishadal becomes festive and crowded during the Yath Yatra where a chariot carrying the idols of Lord Jagganath, Lord Balram, and Subhadra are transported to their aunt’s place. 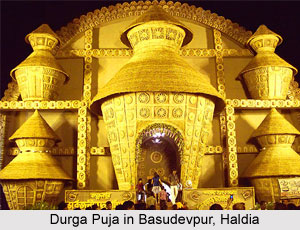 Another big festival that is celebrated in this region. One of the most popular festivals of Eastern India, this festival is celebrated to worship Maa Durga. A ten day affair, it is celebrated grandly in the month of October. Pandals are built in all the major areas of town where idols of maa Durga are kept.

People throng to the pandals in huge numbers decked up in their best attire to enjoy the festivities. One can witness grand pandals and entire areas are illuminated with decorative lights. Fairs are also arranged in certain Pandal Samitees where young and old can enjoy the thrills of swings, variety of food, handicrafts and games.

It is celebrated with great fervor in Haldia. It is apt that an industrial town celebrates this festival with enthusiasm and devotion. Celebrated on Sep 16th or 17th it is devoted to Lord Vishwakarma who is believed to be the Lord of tools, weapons and mechanics. Numerous pandals are  built all across Haldia in various factories and industries. 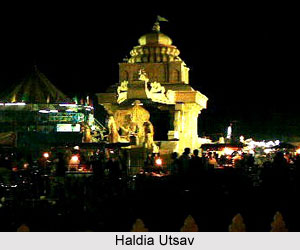 A lesser known festival called Vasa Utsav is also celebrated in Haldia.This is a literary festival which awards and recognizes the learned and poets from Haldia and other parts of Bengal.

It is celebrated during June and July. So, there is a fair chance that you might be able to witness some great poets if you happen to be holidaying at Haldia during June-July.
A variety of festivals, intermingling of cultures and proponent of exemplary handicrafts- these are the ways in which the art and culture of Haldia can be described suitably.