Haldia was a hotbed of freedom struggle during the pre-independence era when India was under the oppressive rule of the British Empire. Many a great historical figures have graced this place with their legendary presence. Veteran freedom fighters and personalities such as Shri Sushil Kumar Dhara, Shri Satish Chandra Samnta and Veer Matangini have been a part of Haldia. 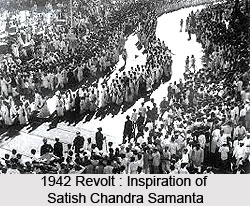 Shri Satish Cahndra Samanta was a very different person since childhood. He was the kind of person who would spend time in philanthropy and serving the needy. This prompted him to adopt Brahmacharya under the able guidance of his Guru, Swami Prajnanananda Saraswati at an early age of 15. Influenced by his guru, Shri Samanta chose to serve people.

He was born on 15th of December 1900 in Mahishadal and chose to venture into the field of engineering. But his ideals forced him to quit engineering while he was in the second year of college in Bengal Engineering College and he plunged into the field of agitation, fighting against the British for freedom. Shri Samanta was an active freedom fighter and socially active personality.

Shri Samanta became involved in the political activities of Indian National Congress and battled for the cause of India’s freedom under the political outfit. His leadership quality and skills helped him become the President of Tamluk Congress Committee. He was instrumental in the formation of Tamralipta Jatiya Sarkar (Tamralipta national Government) which was formed around the time of the Quit India Movement. It worked in various social initiatives such as cyclone relief and educational activities as well. The Tamralipta Jayita Samaj came into existence oon 17th December 1942 and continued operations till September, 1944.

Satish Chandra Samanta was an active and passionate social activist. He had initiated a ot of social activities in the field of education, literacy and public health. Cleaning of roads, free medical camp set ups and spread of education in backward areas wee a regular feature of Satish Samanta’s activities. 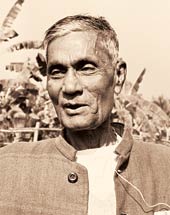 Born on 2nd March, 1911 in Tikarampur in Mahidshadal he was another revolutionary figure from the land of Haldia. He was a staunch nationalist and an active figure in politics. He started early and ventured into politics while he was in school. He slowly climbed the ladder in politics and the fight for freedom against the British. He was also an important part of the Tamralipta Jatiya Sarkar and held important portfolios like war and home in the short lived parallel government. He was the commander of the Vidyut Vahini, the armed wing of the government.

After independence, Shree Sushil Kumar Dhara got engaged in active politics and was elected to the West Bengal State Assembly from the Mahishadal seat for four times in 1962, 1967, 1969 and 1971. He also represented the Tamluk Constituency in Lok Sabha in 1977. After a successful political career, Shri Dhara got engaged in active social work during the period of 80’s and worked for the betterment of the common people. Sushil Kumar Dhara left for his heavenly abode on 28th Jan, 2011 in Mahishadal.

One of the renowned freedom fighters hailing from a small village called Hogla, near Tamluk, Matangini Hazra is a symbol of female power. Born on 19th October, 1870, she was also known as Gandhi Buri (Bengali for old lady Gandhi).

Though not very educated, she was an important figure in the freedom movement in Medinipur region. A Gandhian by belief, she became a member of the Indian National Congress and regularly participated in agitation against the British Rule. Some of the notable agitation in which she took part was the Non Co-operation movement and agitation for the abolition of tax. She was arrested and imprisoned on a couple of occasions because of her involvement in the agitations.

It was a fateful day when while agitating during the Quit India movement, this great freedom fighter laid down her life for the Motherland. The 73 year old Matangini Hazra was leading a procession of around six thousand supporters in their bid to take over the Tamluk Police Station in support for the cause of Quit India Movement. The police opened fire to retaliate against the procession and this great fighter was shot in the process and became a martyr. She has been remembered fondly for her services to the country and a statue has been installed at the site of her martyrdom as a mark of respect and to commemorate her memory.

An important place with a rich history of the struggle for independence of India, Haldia will always be remembered for its heroes who stood up for the nation during adverse situation.


Explore more about History of Haldia