Transport in Haldia is a pretty satisfactory affair. For a small place, it has got quite impressive network of road transport, rail connectivity and water transport which cater to the locals and large number of tourists who visit this place. The Haldia Municipality has worked very hard for a robust transportation system in Haldia and at present is the major transport provider in the town.

Connectivity To and From Haldia

Travel by Road in Haldia

There is decent connectivity in Haldia by buses. The local transport for the public is being catered to by buses under the aegis of Haldia Municipal Corporation. At present there is a total number of 7 bus routes. Networks of 25 buses ply on this route everyday and carry around 8000 passengers on an average. Local buses are available everyday from 5 A.M. in the morning to 9:30 P.M. at night
Haldia is conveniently connected to the Kolkata-Mumbai Highway (NH6). Surrounding places like Mecheda, Ranichak, Brajalchak, Nandakumar, Kapasberia, Radhamoni etc can be reached by boarding bus from Haldia Township.

Important Bus Time Table to and from Haldia

From: Kolkata to Haldia
Starts at: Haldia Central Bus Stand
Arrives At: Esplanade, Kolkata
Time Taken: 3 Hours Approximately
Departure time from Kolkata: One bus at 7:00 A.M. and one at 4:45P.M. 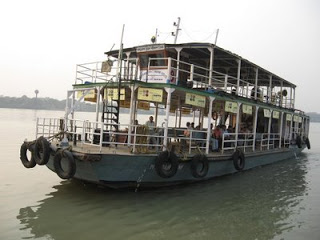 Important Train Time Table to and from Haldia

Connectivity by Waterways in Haldia

A journey which makes Haldia an exciting place to explore is through the waterways. Ferry services and boat services connect Haldia to Howrah, Kukrahati and Raichak.


Important Ferry Time Table to and from Haldia